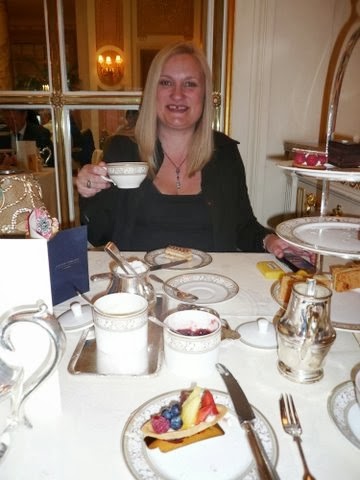 It had always been on my bucket list of "things to do before you die."

Tea at The Ritz seemed to be the ultimate activity for a cake lover as dedicated to wasting time drinking tea and eating confectionary as me.

It had been, quite frankly, a fairly crappy 12 months. My husband had a huge heart attack, followed by a TIA (mini-stroke). He was a fit, healthy, non-smoker who drank in moderation and had an active job with the physique to show for it. No-one could understand why he was having such major health issues. I was faced with the very real prospect of being a widow in my 30's with 6 children.

After his stroke and a long hospital stay DH saw a determined and persistent sonographer  who refused to give up and repeated her tests time and time again after apparently finding nothing wrong. Finally she spotted a undiagnosed tiny hole in his heart which was causing the problems. Finally we had something we could treat. He was referred to St Mary's Paddington where we saw an amazing consultant who promised a radical new treatment, a fairly non-invasive PFO-closure.

The surgeon planned to send a special umbrella-type device up to DH's heart via an artery from the groin and open it up to close the hole. Amazing! It would only involve day surgery so I would take him, lurk in London for a few hours then pick him up and take him home.

Except I was stressed (and pregnant) and even a bit of lurking seemed just too much to handle. So my lovely, lovely neighbour Beth offered to come with me. Great. We could lurk together and since she seems to know London like the back of her hand I felt I could relax and she would look after me.

What I did not expect was her subsequent surprise - to distract me while DH was in surgery she booked and paid for us both to have afternoon tea at The Ritz hotel in London.

And honestly it couldn't have been a better distraction. It meant I sat and relaxed and I ate which being nervous I probably wouldn't have which is not great when you are diabetic (I have type 2).

Beth is an intelligent, witty Yorkshirewoman who is always great company and through what could have been the afternoon from hell she kept me entertained. We ate and ate and ate, determined to make the most of the gorgeous delicacies put before us, drank gallons of tea and had lots of fun people-watching.

Although I was still very aware that DH was under the knife she kept reassuring me that everything would be fine. And if you can't trust a Yorkshire lass who can you trust? She even egged me on to send a request to The Ritz's pianist to play Abba's Dancing Queen - which he did!

So although it was always going to be a day to remember it's ended up in my memory as a Magic Moment - the day my husband was restored to full health, and the day I enjoyed Tea at The Ritz.

PS; Beth, my lovely lovely neighbour and friend - if you ever need a cup of sugar, the loan of a handbag or a kidney - you only have to call.....