I want to ride my bicycle...bike training tips for parents.

on July 01, 2014
I can remember learning to ride a bike. I don't remember how old I was but I can clearly remember my first bike ride from our home to my paternal granny's house and how proud I was on my Puch bike.

It's a rite of passage and marks a new chapter of independence in a child's life so I was delighted this week that my youngest children have been practicing their skills and are now much more confident on two wheels.

Despite the saying:"As easy as riding a bike" for some children it's not. Dyspraxia, other co-ordination issues and plain old fear can make what should be a simple skill really quite difficult to master.

And so it was with two of my children who for some reason despite us using the same methods which worked with our older four children just could not get it!

We have tried for years but always had to abandon the lessons with the promise to try again soon. But this year I was determined and changed our method to teach the child desperate to master it.

We normally head for our recreation ground - a long flat grassy stretch- to minimise injury on those inevitable falls. But his school friends play there so we swapped to a friend's large (and private) garden so no-one could witness his efforts.

I printed a certificate I found on the internet and said if he managed to ride a figure of eight round two trees we would present him with it. And in a modern twist I videoed him so he could see his own progress - this helped him realise that he wasn't going as fast as he thought! 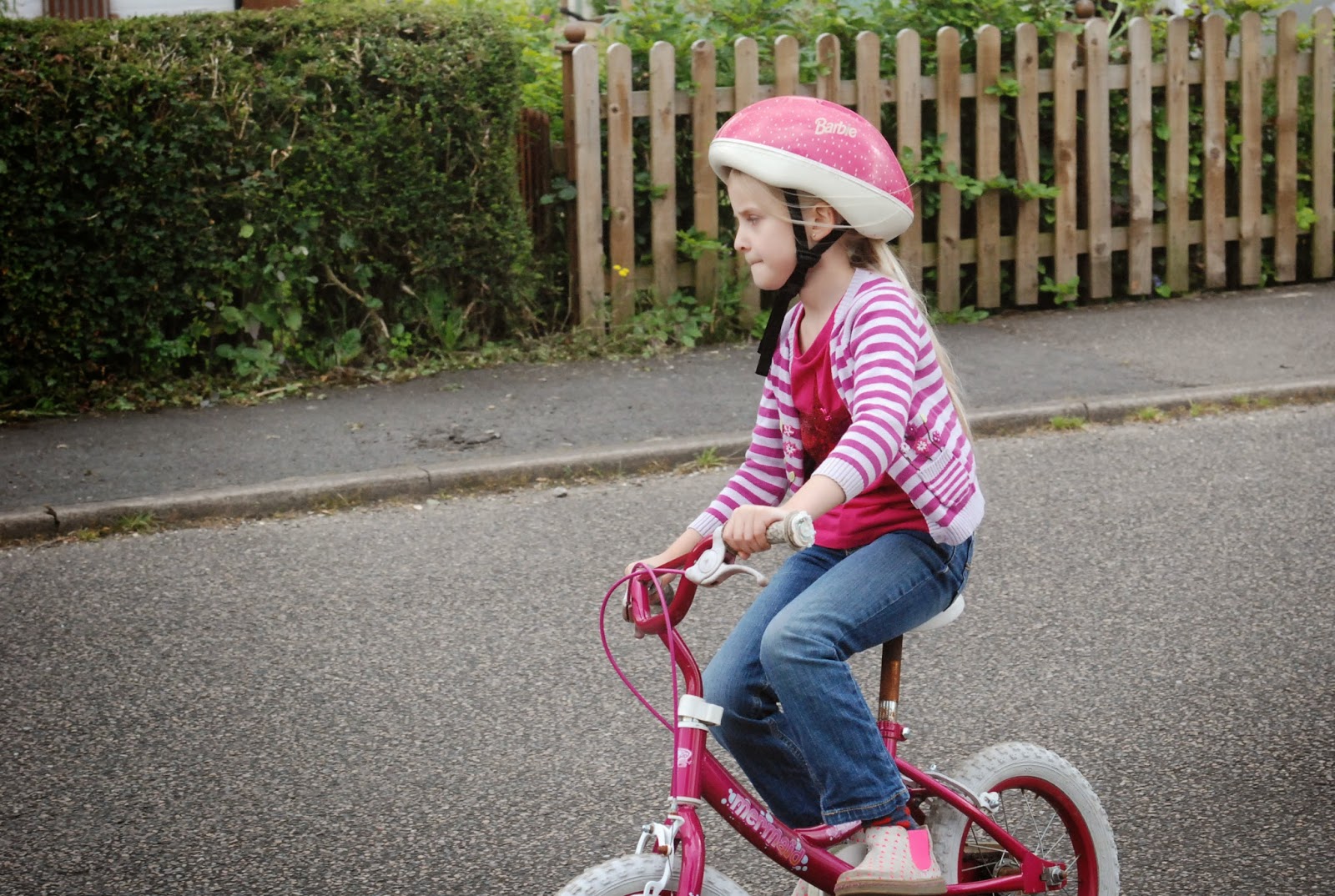 It worked! And seeing him whizzing around his younger sister asked for her stabilisers to be taken off. DH removed them and before he returned to help her with that first Dad-assisted launch she had set a determined look on her face and had pushed off on her own! It took a while for her to master turning and we have a few skinned knees in our house at the moment but in the space of a couple of days we have two new and keen two-wheeled cyclists! 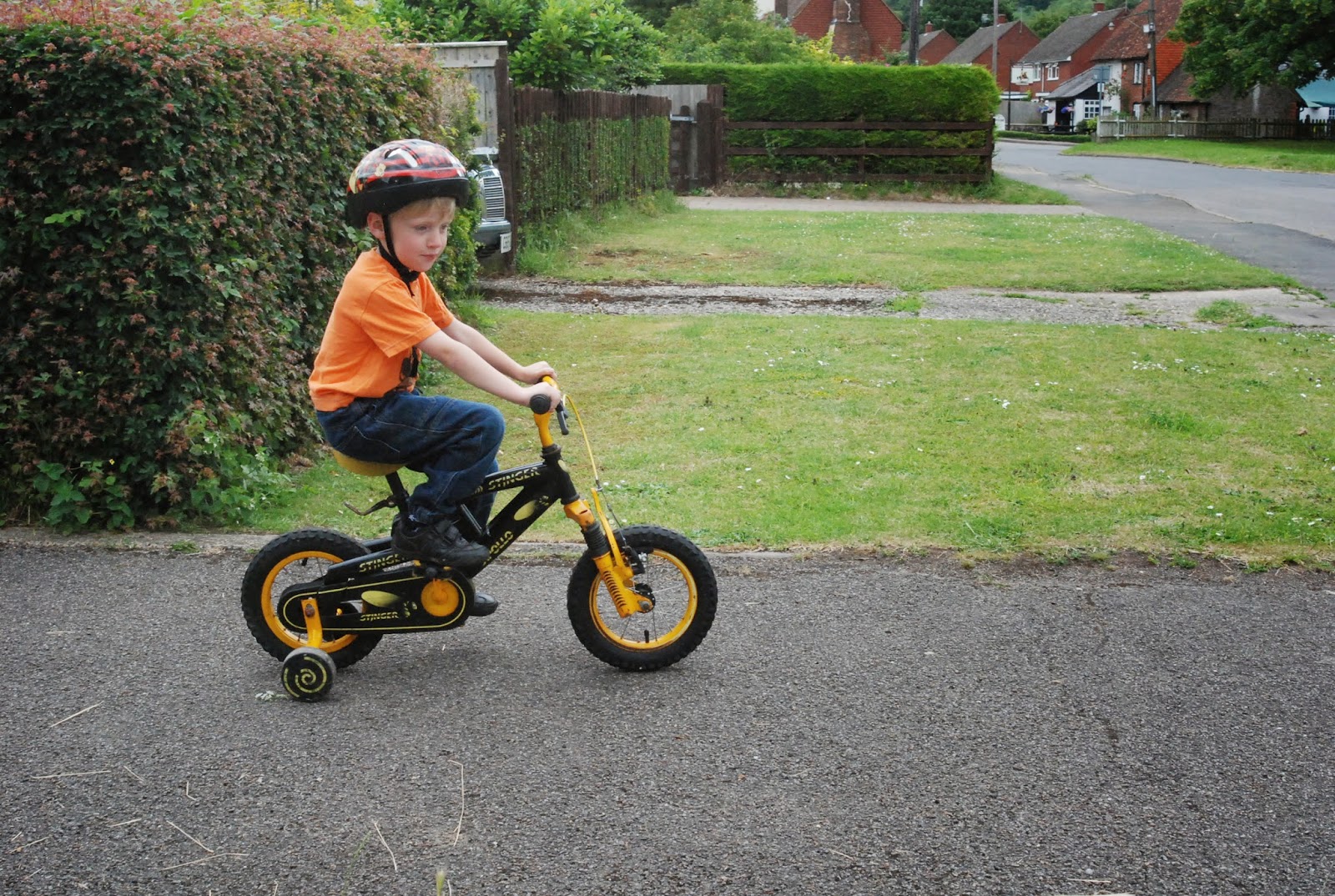 Grumpy meanwhile finally showed an interest and is so confident and skilled on a balance bike that I think he may graduate to his "proper" bike very soon. For now though he's still got his stabilisers on and of course his Dennis the Menace cycle helmet!

So after teaching 6 children to ride bikes here are my top tips:

1. Make sure the bike fits. This is crucial. The bike we bought DS was a teeny bit too big. He could sit astride with both feet on the floor but he was on tip toe and it made it too hard to learn on. So we borrowed a smaller bike (probably even a bit too small!) for him to learn on.

2. If possible find a large grassy area to learn on. A gentle slope is fine but remember it's hard for little legs to pedal uphill at first and a steep slope down will mean the bike runs away from them.

3. If your child is scared or reluctant don't bully or criticise (easy to find yourself doing this when you are frustrated!)  Reward even failed attempts with encouragement and successes with cheers, applause and stickers or a certificate.

4. I would definitely recommend a balance bike for toddlers upwards. The wooden ones look lovely but Grumpy didn't like it, wouldn't use it and we ended up selling it. This week we borrowed a metal one which looked more like a "real" bike. He mastered it in minutes.

5. Don't forget the helmet! I know some evidence shows they don't help but I can't see how? I would rather mine wore helmets and chose ones they wouldn't  mind wearing. Even my teens wear them. Try skate-boarder  or even motor-biker styles for children who don't like traditional helmets.

6. Don't be too concerned about when other children learn. I had pressure from people who thought my child "should" be ready. You know your child better than anyone!