on December 03, 2014
So my husband's friend is a gentle giant - a burly scaffolder with tattoos and piercings but one of the kindest, softest most lovely men you could wish to meet. I tell you this as I want you to picture him as you read this story recounted to me by DH and written here with the full permission of, let's call him Geordie.

So Geordie keeps his head completely shaven - not even a #1 on the trimmer - he wet shaves his whole head leaving it smooth and shiny. It suits him and working in the building industry a bald head means no dirty, dusty hair. 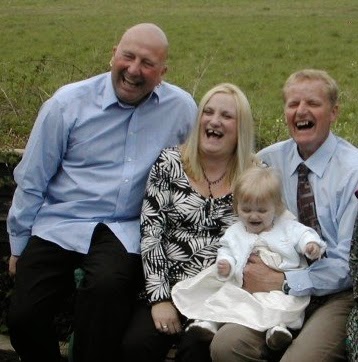 He told my husband that he generally sits in the bath, lathers up his whole head and takes a razor to it. Impressive - I'm not sure I'd like to do the back of my head with a razor!

So recently he's performing his usual beauty routine when he spots something on the shelf. It was, in his words, his partners "lady shaving gadget."  The way he described it, it sounded like some sort of epilator.

For reasons he can't (or won't) explain Geordie thought he would give it a go. He expected it to be a little bit uncomfortable but was confident as a tough scaffolder he would easily bear any mild pain.

He decided to start with his legs. Again - I don't want to delve too deeply into this decision! He reported to my husband that it was AGONISING! He said it was ripping his hair out by the roots. Well, yes that is sort of how they work but I know many women who successfully epilate areas much more sensitive than their calves!

And then his partner walked in.

Apparently her eyes nearly popped out of her head as she shouted:"What on EARTH are you doing????"

Geordie felt embarrassed, like he had been caught out doing something really wrong He felt even more embarrassed when she added:"That's the thing I use to defuzz my jumpers!"