Fallout 4 midnight launch - I was there.

on November 11, 2015
I have some very keen gamers living in my house, and one keen gamer who no longer lives here since he left for university a year ago. This week has been a big one for them.

As gamers will know the latest in the hugely popular Fallout series was released at one minute past midnight on Tuesday and because I am the best mother in the world, I was at my local branch of Game waiting with one son who had preordered a copy and to pick up a copy for another.

Wait - not only had I headed to my local town way past my bedtime but I had earlier done a four hour round trip to pick up my student son as the only place he had been able to preorder his Pip Boy Edition was near our home, not his!

We arrived just at 11pm to see lots of people (mostly male) milling around the store. We joined a short queue inside to pre-pay for the games which I thought was a bit OTT until I saw the queue to pick up Fallout 4. I could see why the store manager would want pick up to be as smooth and quick as possible! 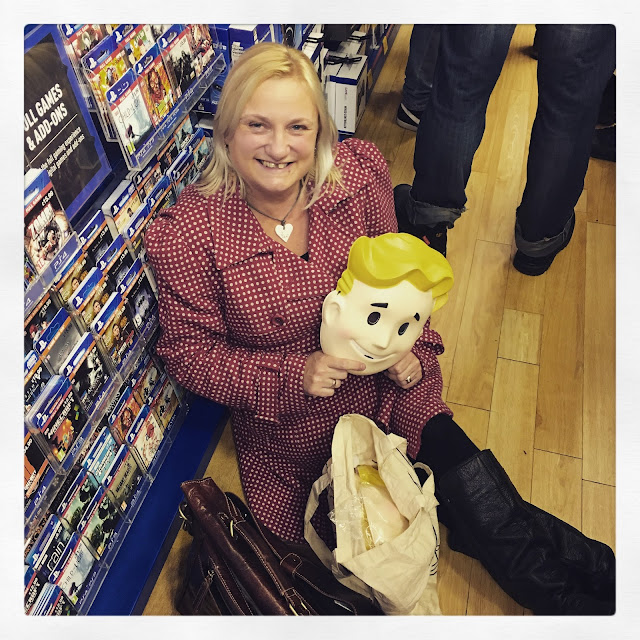 Now I'm going to be kind and not talk too much about the people queuing with us. Let's just say our party (me, son and husband) felt like we stuck out a bit with our choice of clothes and hair style. It was exactly the kind of crowd you would expect at a midnight game launch, many of them clutching energy drinks!  Clever move since most of them would be spending the rest of the night exploring their new game.

I joked that my husband looked like he had joined the wrong queue and thought he was waiting for the midnight opening of the Fatface sale!

The atmosphere was lovely and there was a buzz of like-minded gamers sharing tips and experiences. I lasted five minutes standing before deciding to wait the hour out sitting on the floor. I entertained myself watching the #Fallout4 #FalloutSelfie #FallOutBoy hashtags flying about on Twitter. 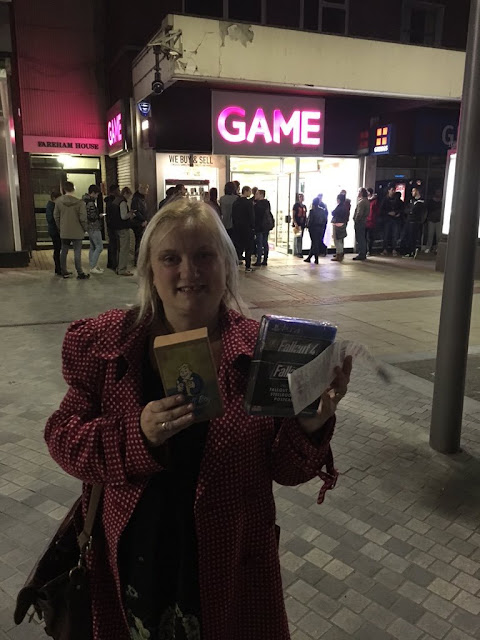 Even though I am not interested in gaming I felt a rush of triumph when I was handed my son's special club edition- but was not keen enough to join my older son playing the game. My bed was definitely calling to me by the time we got home!