An action-packed day out at Portsmouth Historic Dockyard

on October 24, 2016
The last time we visited Portsmouth Historic Dockyard was around a decade ago and so a return trip to this vast collection of attractions in and around Portsmouth in the south of England was well overdue! 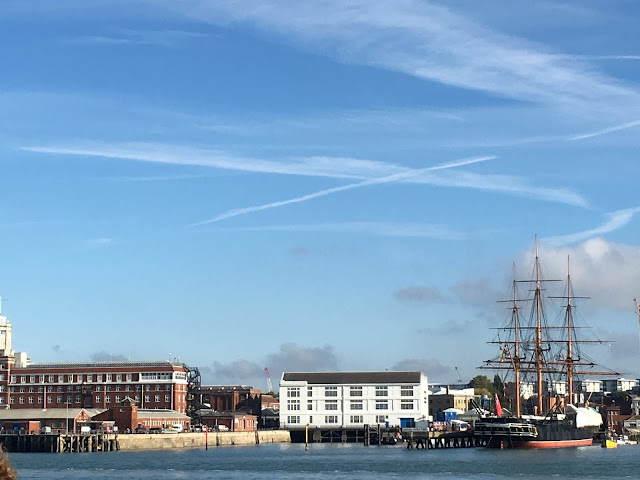 Despite leaving our home in thick fog, by the time we got to Portsmouth the fog had gone and we had a glorious sunny day to explore the myriad of elements that make up the Historic Dockyard attraction.

We started with a session on the climbing wall in the fabulous Action Stations area. It's apparently the tallest indoor climbing tower in the UK at 27feet/8.4 metres so I was impressed at how enthusiastically my youngest three scaled it. 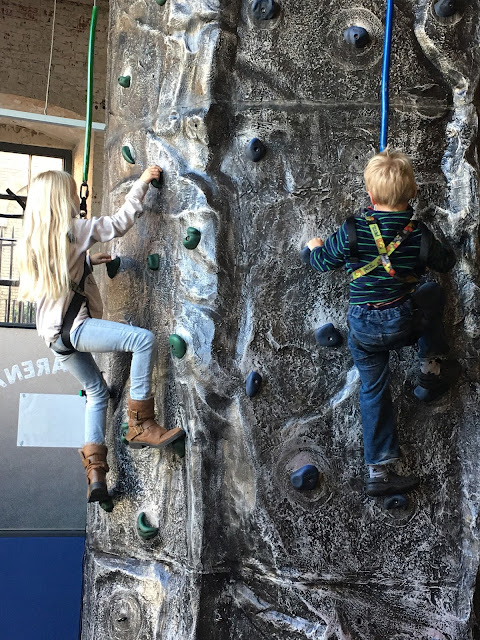 There is so much to do in the Action Stations venue my children ( aged 8, 10 and 11) would happily have stayed there all day. We managed to drag them out after their climbing session with a promise we would return after the harbour boat tour which I was really keen to do. The tour is 45 minutes long and when we visited it left on the hour, every hour and I was determined to get on the 11am boat. 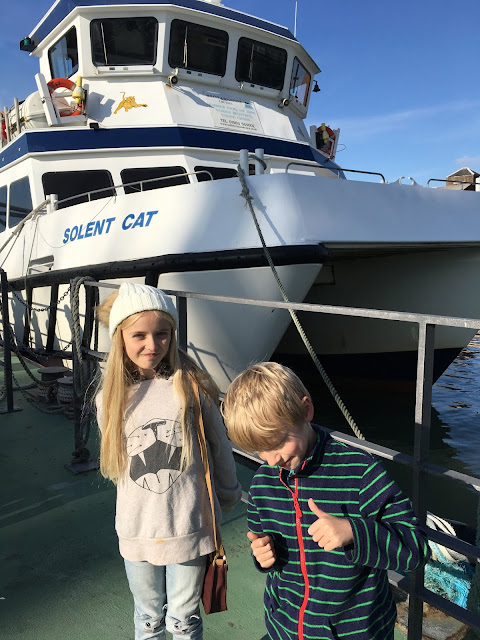 The harbour tour did not disappoint. We sat on deck where there was lots of seating but if you prefer to sit inside (if the weather is less kind than it was for us) there are lots of seats downstairs too.

The tour guide was both informative and entertaining and we had plenty of chance to see the interesting things he was describing. The harbour tour loops round so if you miss something on one side you will see it on the way back.

We stopped at Gunwharf Quays (Portsmouth's fabulous outlet centre with lots of bars, restaurants and a cinema too) on the way back. Apparently you can join the tour or leave it there if you aren't visiting the rest of the Historic Dockyard.

A quick word on this - you can visit each museum or attraction individually but if you buy the Jutland All Attraction package ticket you get access to all 11 attractions at Portsmouth Historic Dockyard, admission to the blockbuster exhibition on the Battle of Jutland, the Harbour Tours and Waterbus services to the off-site attractions-the Royal Navy Submarine Museum and HMS Alliance, Explosion Museum of Naval Firepower in Gosport and the Royal Marines Museum in Eastney.

Best of all, the "all attraction" ticket is valid for an entire year. A family ticket for two adults and up to three children costs £68.26 and I think that represents excellent value for money even if you can only go for the day but if you are able to visit again and again it is an even better deal.

Harbour tour over we headed back to Action Stations where the children piloted a helicopter (in a simulator of course but a very realistic one) and had a ride in another helicopter in another simulator. 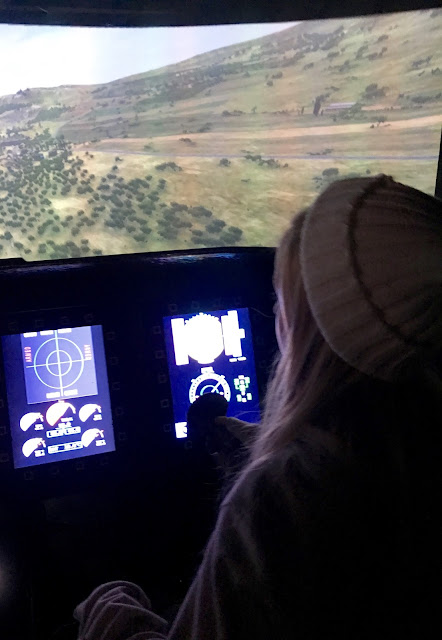 Their gaming paid off as they proved quite deadly on the battle simulators and Grumpy particularly enjoyed listening to work out when the sonar ping changed pitch so he could drop a depth charge on a submarine. 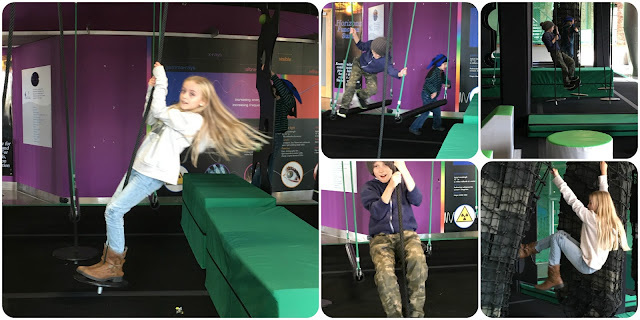 They made gas to power a rocket with some serious elbow grease and leapt around enthusiastically on the new Ninja Force assault course. There were lots of science based activities to explore and if we wanted to pay a little bit extra there was even laser quest zone and  a cute little boating lake. 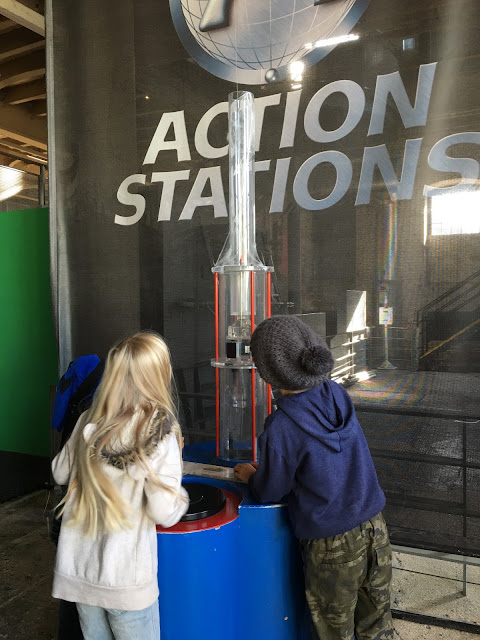 We wanted to explore the dockyards more though so headed to HMS Victory which I remembered being fascinating last time we visited. I wondered if the children would enjoy it but they loved everything about the historic ship from seeing how the sailors lived to braving the sometimes steep stairs backwards. 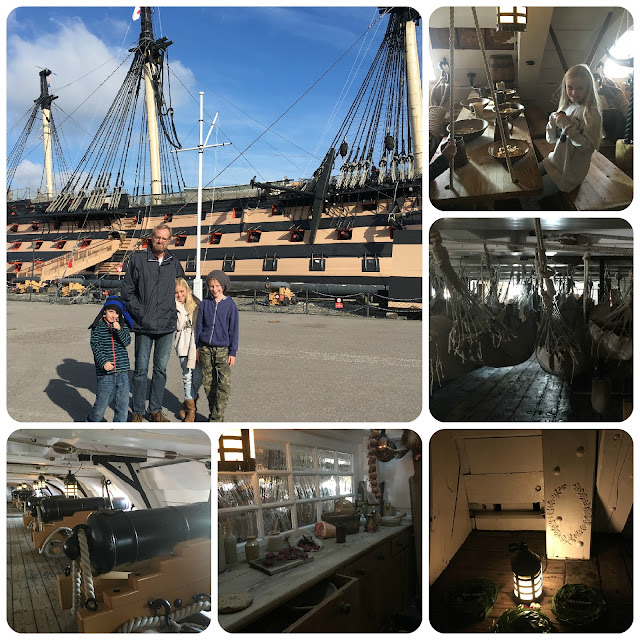 The ship has been really well maintained with excellent displays giving a sense of living history. It sent shivers down my spine every time I remembered it was Vice-Admiral Lord Nelson’s flagship at the Battle of Trafalgar.

Finally we headed into the magnificent Mary Rose exhibit.

I have a special fondness for the Mary Rose as my childhood was punctuated with updates about the famous sunken ship on Blue Peter which I watched after school.

When we visited last the ship was still being sprayed constantly to preserve it and we didn't have the best view of it but years along in the process the ship is part of a really imaginative exhibit which allows you to clearly see the remains on the doomed vessel along with rescued artefacts and cleverly placed videos which are projected onto the skeleton of the boat to make it come alive.

I would have loved to stay longer in that museum, and to visit some of the other attractions (we were all very keen to go on the water bus to the submarine museum and the explosion museum) but we simply ran out of time and energy.

It is well worth devoting a few days to the dockyards or making it a year-long project to visit, Portsmouth might not seem like an obvious holiday destination but there is so much to do in the area, especially for  families. 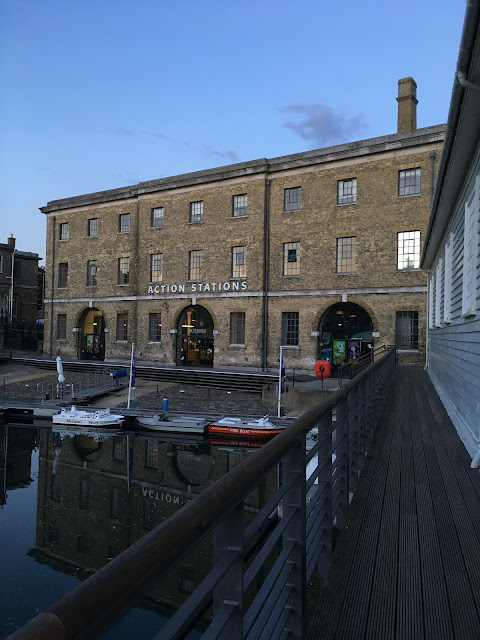 There are beaches (head to Hayling Island for the best shingle/sand beaches), the Isle of Wight is a 10-minute hovercraft trip or a short ferry ride away, there's a traditional British pier, great shops, swan boats on a seafront boating lake, a great free museum with butterfly house, skateboard park, sea-front splash pools for younger children, a model village and of course the Spinnaker Tower which you can go up if you are brave enough.

Portsmouth Historic Dockyard has something for all ages and plenty of places to stop to buy food and drink or to picnic. If you are bringing a pushchair or wheelchair or other disability aid, check the website which has lots of information about the best way to gain access to attractions and which ones are most accessible.

My youngest daughter was using the day as her school work shadowing project - she was shadowing me as a mini-blogger and took lots of pictures for me.

This is her take on the day:

My favourite part of the day was looking inside "The Victory" because it was amazing to have an experience of what it was like to live on the sea. There were five decks packed with things to see like: the main deck; the cabins; the hold; a hundred hammocks and a small kitchen to feed all those men. it was an awesome day.

Interestingly at the end of the day, all of the children named exploring HMS Victory as their favourite part of their visit - and that's competing with screen-based shooting fun, climbing and a boat trip! It just goes to show even today's tech-mad youngsters can be wowed by history if it's presented in an interesting way. 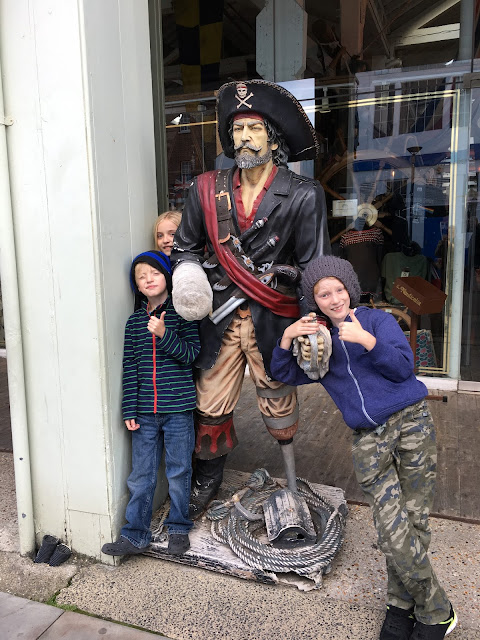 Disclaimer: We visited Portsmouth Historic Dockyard free for the purposes of this review. Views and opinions remain honest and my own.