How To Mentally Prepare for Extreme Decluttering

During the multiple lockdowns I'll confess I did not really do anything worthy like take up yoga, change my diet (apart from adding more biscuits to it) or learn a new language.  I mostly watched more TV than I ever have and in the process left a dent in my spot on the sofa.

However, one of the programmes I watched while scrolling through channels I had never previously explored, was an American programme about hoarders, with the highly original title of "Hoarders" on Amazon Prime. It changed my life. 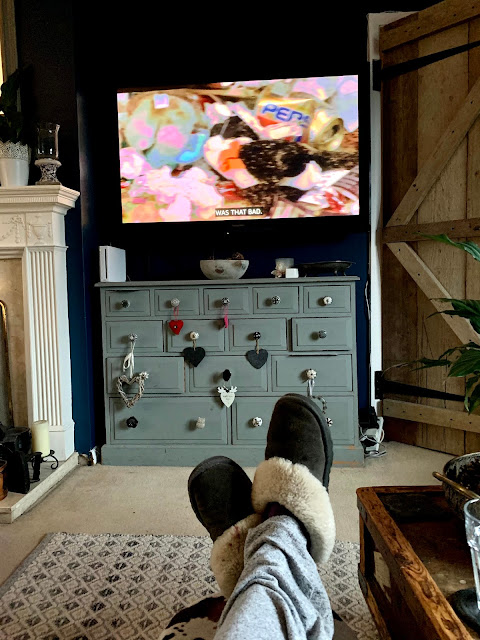 I've always been untidy. My poor mum who keeps a very tidy house despaired of the state of my bedroom when I was a child.

Fast forward a few years and with seven children and a tight budget I always saved stuff - clothes, toys, equipment- to pass down from child to child. Football boots, summer sandals, winter coats - it just piled up and although I was not quite ready to feature on a Hoarders-style TV programme it was enough to make me too embarrassed to ever let anyone upstairs.

I mean, there were no cat skeletons or 10 year old takeaway cartons, but there was a lot of stuff, so much stuff that even when I did need a coat for the next child down, I had trouble finding it.

Downstairs luckily I managed to keep relatively clear, although my decorating style leans towards cluttered rather than minimalistic.

But then I watched Hoarders.

This version of a popular documentary subject had psychologists working with the hoarders along with the cleaners. When the householders struggled to allow things to be taken away these experts stepped in and with words of wisdom usually enabled the process to continue as painlessly as possible.

A few statements really resonated with me and although I've had clear outs before I've only ever been able to tackle a small part and the process has left me feeling stressed and anxious. This time I've whizzed though the entire house in a week - done every room and organised so that going forward should be relatively easy.

In case any of my readers struggle like I did, maybe don't even realise why they hang onto stuff, I'm sharing the truths that made the world of difference to my mindset.

Memories live in your heart and mind, not in stuff. 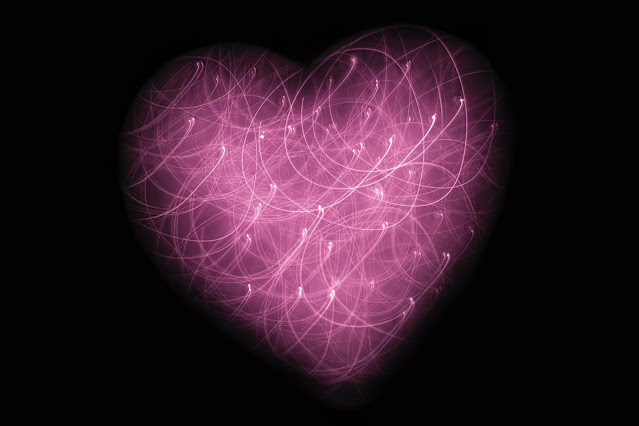 In my airing cupboard I had the pillow from my son's first bed, curtains from the first home I bought which I left in the early 90's, and a variety of themed duvet covers from Thomas the Tank Engine to Star Wars, all faded and tatty. Under my bed were summer hats which my daughter wouldn't be seen dead in now, tiny gloves (usually odd ones) and novelty winter hats.

I found bags of babygros, baby sleeping bags and teeny socks. At 51 and well into the menopause there's no way I'm going to be adding to our brood and looking objectively at the things I found, they were tatty and faded and no-one else would want them either.

Photos and cards and certificates I found have now all been sorted into box files so if I do want a trip down memory lane I can pick one off the shelf and go through it. Some old photos and a pencil drawing of the church we got married in have been framed and I've created a picture wall in my newly tidied bedroom. 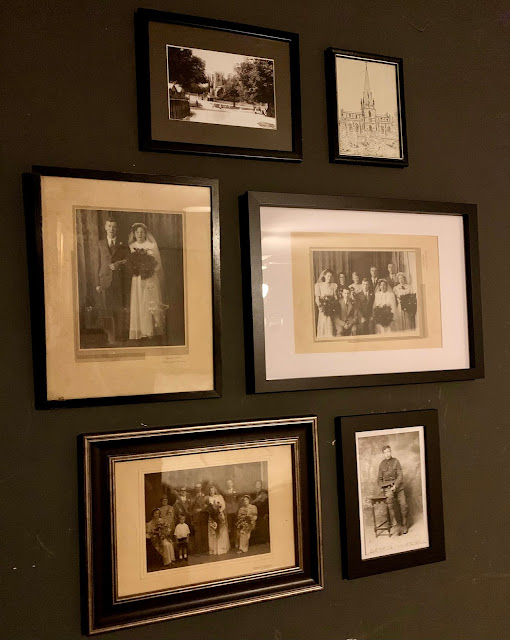 All the clothing went off to the charity clothing bins and the tip got the rest.

I can hear you asking, why did I not try and sell stuff? Read on....

You might intend to sell or pass on stuff but in all honesty, will you really?

A lot of things I had stored because I thought they might one day save us money, or help out someone else, or would make us money if I sold them. A great example of this was a beautiful but outgrown Monsoon party dress which my daughter wore for a wedding and then maybe one other time.

I tried to sell it online but got no real interest. I hung it up intending to try again in the summer. In the summer I forgot about it and here we are in February with the dress still adding to my overstuffed wardrobe. I couldn't quite bring myself to just bung it in the charity bin bag so I gave it one more chance and offered it free to a neighbour who gladly accepted it.

I also managed to sell an unopened board game and a few blog goodie bag bits at bargain prices.

However I gave myself 24 hours to sell or give away stuff and after that vowed it would go to the tip or the charity bins. I will continue with that rule going forward.

Look to the past to understand the present.

I grew up with my entire extended family being good at passing things around for other members to use. Even my childhood cot has been used my multiple members of the family as well as all of my own children.

"Waste not, want not" was a favourite saying of my Gran's and we were way ahead of the recycling movement - I can remember my granddad washing out bread bags to re-use as sandwich bags. This was not through poverty, more I think as a hangover from living through the war.

A consequence of this learned mentality means for one thing, I had an entire kitchen cupboard devoted to plastic pots from takeaways and the like which bizarrely all have unique shapes and sizes so to use one you needed to unload the load and play the "match the lid to the tub" game.

When you can buy a set of brand new ones, without the yellow curry tinge stain in Poundland, you start to think, why am I keeping all of these when storage in my kitchen is at a premium?

Actually, my 21 year old son led me to one of the most useful realisations which made it much easier to let things go.

During my extreme decluttering I found three bags/boxes of assorted wires, leads and chargers all tangled  by evil pixies in the middle of the night when you aren't looking. Well, I assume that's what happens. 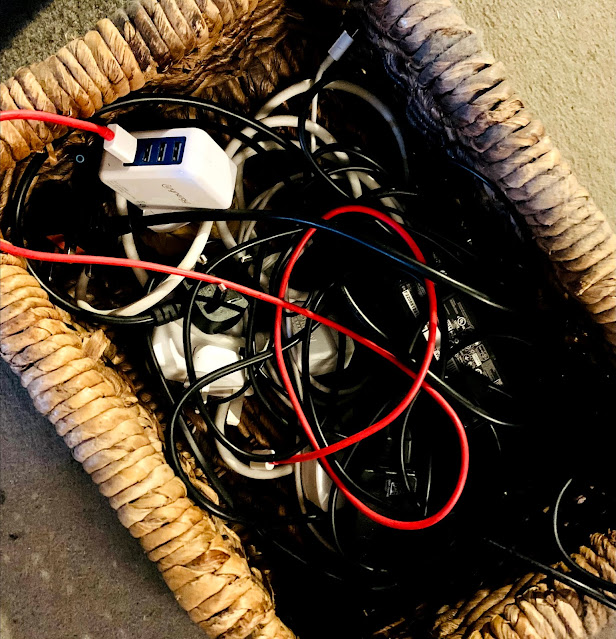 I showed them to my techie son with an idea he might untangle and go through them. His response was:"There's nothing in there we need and if there was, we can get it on next day, or even same day delivery from Amazon for very little money."

This was an epic realisation! I had to repeat it several times to my husband who found spare kettle leads particularly hard to let go of.

I am a great believer in re-use and recycle but when it leads to a decline in mental health because you end up hoarding things, it is useful to remember that in this day and age we have shops and online shopping open all hours which means stuff you need is easy to source and buy, often at very little cost.

Yes, we might need a kettle lead in the future but the trouble is with hoarding them is that at the point you need one will you remember you have one and if you do remember, will you be able to find it? The answer in my case was;"Probably not."

After a hectic week my son now has a lovely workspace and a sofa in his room so he and his siblings can chill and play console  games in the space, freeing up the lounge.  I have moved my old breastfeeding chair near to my bed now into the space previously occupied by aforementioned boxes of wires so that when children come into my room if I am resting during a fibro flare up or first thing in the morning or last thing at night, they can sit and chat.

My daughter has much more room in her tiny box room with less clutter and new storage solutions. My landing is completely clear for the first time in years as we have made enough room in the boys' bedroom for their drawers to fit in there instead of lurking on the landing.

For anyone daunted by the thought of an extreme clear up, take it from me. It's physically and emotionally exhausting but totally worth it.

Now I can relax and watch Hoarders again with the experience enhanced by a slightly smug feeling.