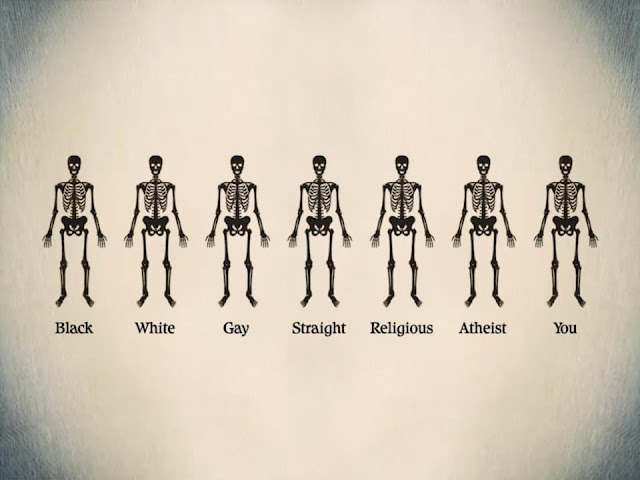 It's as simple as this picture isn't it? I loved this image shared a few years ago by Boy George because this is what it comes down to. We are all human and my belief as a Christian is that God created and loves us all.

But sadly some people use scripture to judge, berate and exclude some sectors of society and I am ashamed to say, if you didn't know this, that the Anglican church, the Church of England, still doesn't allow same sex couples to even have a blessing of their relationship in church never mind a wedding.

Thankfully it seems the church as an institution knows that many people are unhappy with this situation so  has decided to invite opinions on whether things need to change.

It has produced a "Living in Love and Faith" course which has been particularly good to educate and inform those who may have lived in a time when homosexuality was illegal, or who have had no contact with anyone who is openly gay or who don't understand that the Bible interpretations they may have grown up with are not necessarily accurate.

As well as discussions on interpreting the Bible we heard from a variety of people with different experiences of living in love and faith, including same sex couples, transgender, disabled and celibate Christians.

Our team parish offered a number of opportunities for people to join together to explore the course resources in house groups or via Zoom through Lent, the four weeks before Easter. This was quite well attended compared to our usual Lent groups which was a good sign of the strength of feeling on the matter. The course was available nationally so hopefully lots of people who wanted to learn and pray before offering an opinion will have had the chance to do that.

The church has softened its view on divorcees, gay clergy and female priests relatively recently and although there are still a LOT of issues the organisation and congregants need to study and pray on, now is the time to talk about our policies on same sex marriage.

Before I knew what choices my children would make I was already uncomfortable about the ban on blessing or marrying same sex couples. Now this rule directly affects my own family which feels like a betrayal from the church I have been part of since birth.

In the summer the General Synod, the church government, will meet and discuss whether the situation should change. Should the church allow same sex marriages?

At a meeting last night I fought back tears to speak on this subject at a church meeting to discuss what message we would send to Synod.

My children, all seven of them, have grown up as "church kids." They attended toddler groups and toddler worship. They joined the Junior choir, helped me run Messy Church and Light up the Dark events on October 31, have sat through endless Sunday services and Festivals. We have held the true meaning of Christmas and Easter close. They have all studied to be allowed to take Holy Communion and some of them have chosen to be confirmed. Throughout it all they have been welcomed and supported and loved by their church "family."

My son just had his baby, our beloved first grandchild, baptised in "our" church and the congregation prayed for us all and celebrated in our joy.

But although my son who is in a loving heterosexual relationship could marry there, some of his siblings would be turned away because they may want to marry a same sex partner.

After a lifetime of being raised Christian with an overriding message that God loves and forgives us this is more than an embarrassment. It's an issue which has already had some part in driving some of them away from faith.

I tried to communicate to the people at the meeting that the people we are talking about are not "them" but us.  As well as deciding the future for people we will never meet, we are talking about existing members of our community, our friends, our relatives, our children. I was not the only one sobbing in frustration and disappointment on their behalf during this meeting.

Every year the church marries hundreds, possibly thousands of couples who fall short of biblical ideals. If you stick to scripture we shouldn't be marrying any divorcees or anyone who doesn't honour their body - alcoholics, the obese, drug addicts etc.

We marry people who commit an eye watering amount of sin including abuse, rape, murder. We don't check criminal records, weigh people or ask how many cigarettes they smoke. We marry people we know full well have never set foot in church previously and probably never will again but want a pretty venue and a white dress.

But loving couples (who may even be practicing Christians) but happen to be the same sex? Nope. Sorry.

Last night the overwhelming feeling seemed to be that as a team parish we would support a change in the church's stance on same sex marriage. Not 100% agreement but certainly a majority. There did seem to be some residual confusion about how trans people would fit into the equation. Bear in mind many of these people admitted they had had very sheltered lives and many probably couldn't list what the letters in LGBQT+ stood for.

I refer anyone with any confusion to the image at the start of this post.

One of my children is non-binary and many people also don't understand this definition of gender. It's really, really easy. Whatever the label or pronoun or reassignment status they are just people, fellow human beings.

My children don't see what all the fuss is about when it comes to gender and sexuality and I gather from friends that their children feel the same. In the way we ask someone's name, they ask their preferred pronouns. In my experience there is no judgment, no proof required, no disbelief.

I believe that God created us all with love, we are all people created in his image and if two of those people want to be joined in Holy Matrimony we should support and enable that.

If you'd like to read the material produced by The Church of England or submit YOUR view, insights or experiences for consideration (before Saturday April 30th) head to the Living in Love and Faith website.