I am a massive lifelong ABBA fan. With blonde hair and blue eyes I obviously identified with Agnetha. Sadly no-one listens (willingly) when I start to sing but I was the girl with the golden hair and given the opportunity and enough gin I am most definitely a dancing queen. 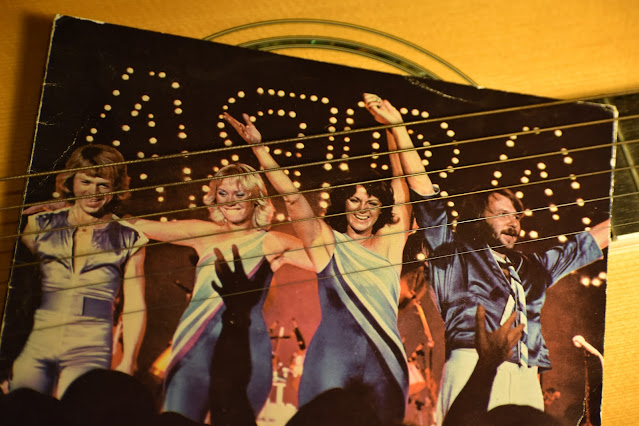 When I was at primary school I was astounded and incredibly excited when one of the boys bought me a box of Milk Tray chocolates (the height of sophistication in 1980) and a copy of ABBA's Super Trouper as a Christmas present.

I think a gang of boys had gone shopping together and then each picked a girl in the class to gift. I was an awkward geeky girl with rabbity front teeth (grew up into an awkward geeky adult with rabbity teeth) and to this day have no idea why this boy chose me but wish I can tell him that the moment he handed me the single and chocs he endowed me with a confidence which stayed with me. No, nowadays I don't think anyone needs someone else approval or attention to feel validated, but back then it made a huge difference to the way I looked at myself.

Anyway, I stuck with ABBA through the lean years when it was desperately uncool to like them and when Mamma Mia was released was overjoyed to be able to join in the outpouring of appreciation for this quirky Swedish pop group.

Of course since the last time they performed in the UK was 1979 when I was just 10 years old I have never been able to see them play apart from on a screen.

Then I learned about ABBA Voyage, a unique concept which would give fans the nearest thing to a concert using  "avatars" created by capturing the movements and singing of the original band members in a studio in Sweden. Add a 10-piece live band, real life backing singers and a purpose built ABBA arena in south London and this sounded like a show no ABBA fan could afford to miss.

Desperate not to miss out, me and DC4 ordered the merchandise bundle which gave us access to the early bird tickets and on the appointed day sat expectantly with a laptop each to give us the best chance of good seats. Or any seats. I didn't really care.

Then we just had to wait months for the actual event.

Other friends saw the show before us but in a massive fan-wide conspiracy to keep the show a surprise I just learned that it was amazing.

I'm not giving anything away by saying I defy you not to be astounded by the technology, the showmanship and just how flipping real those avatars are. The arena is very well designed and getting food, drink and merch was pretty easy without any huge queues. You can even order drinks in advance although the choices are limited. We enjoyed decent Mojitos for £9.50 each, albeit from a tap.

I bought an unbleached cream cotton T-shirt featuring a 70's style design of birds in a tree and the words "Take a chance on me" for £30 which was not overtly concert merchy, and a cotton tote bag for £7 plus a reusable aluminium water bottle with water in for £4.50. I was impressed with the range available from jackets and tea towels to scarves, T shirts which were more obviously concert merchandise and what we used to call knitted tank tops.

We parked in dedicated Blue Badge parking which can be booked by email (I'd do that well in advance as there are only ten spaces) but the Pudding Mill Lane DLR stop is right next to the arena - literally over the road.

The audience at the matinee we attended was mostly middle aged (like me) and quite a few people had dressed up. There were quite a few cat T-shirts and dancing queen T shirts. Lots of people like me had opted for 70's style (my child who came with me opted for their usual style!) 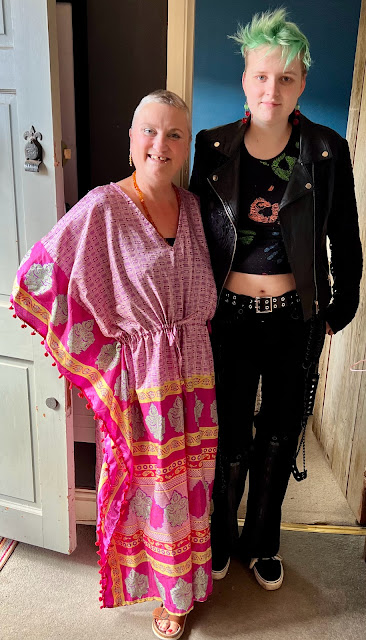 I spotted a few glow stick bracelets and flower crowns in the audience and lots of groups of friends having a truly lovely time. In a way I wish I'd chosen an evening performance as the matinee was a little subdued with most of the dancers and participation coming from the standing only "dance floor" at the front. Seated people mainly stayed seated.

Singing along is mandatory and that together with in between talky bits from the band members and those IRL performers accompanying the avatars makes for a show which was worth the 40 year wait. I'll admit I spent an awful lot of time squinting at Agnetha, Anni-Frid , Benny and Bjorn, marvelling at just how flipping real they looked. For a while I wondered if it was all a hype and we were watching really good look-likeys. Check out this official video to see what I mean unless you plan to go and really want it to be a surprise.

Some people have scoffed that you are paying a lot of money to not see ABBA. For some (including me) this is the only opportunity to get anywhere near seeing the band who broke up so long ago. It's a musical miracle which feels like a gift for the faithful fans.

Others have said this is the future of gigs, especially for older performers who can't take the stress of touring or bands who have lost a member. Certainly my husband is hoping for a Queen revival featuring a Freddie avatar.

I maintain that even if you only have a passing knowledge or affection for ABBA this is a spectacle, a glimpse into the future which is well worth experiencing. ABBA once again proving they are ahead of their time.

Thank you for the music ABBA.