Rediscovering my Love of Kayaking.

Many years ago my parents owned either kayaks or canoes - I can't entirely remember. I do remember them having an absolutely fabulous time  and when I was a little older I recall going out on the canals of the Black Country with my Dad. There were pubs involved I recall. 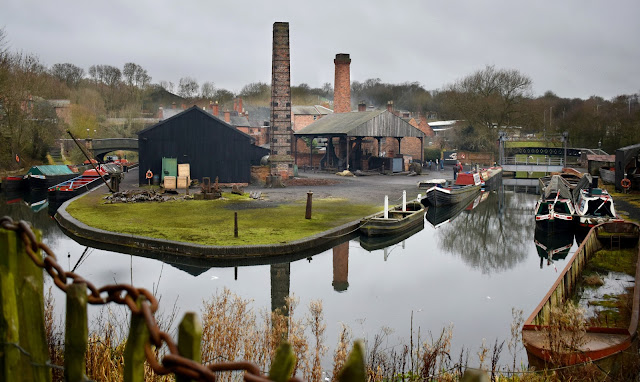 When I moved to the Home Counties 30 years ago I realised we were very close to the canal and imagined that one day my new husband and I would paddle happily along exploring the area. I hadn't factored in 7 children.

My youngest is in his teens now and I have a little more time but am wary of exercise because. I have fibromyalgia and Lichen Sclerosis.. However, visiting my eldest recently I very much enjoyed spending the day messing about on the water having a go on his new SUP. I couldn't stand up but it reminded me of how much I enjoyed paddling. 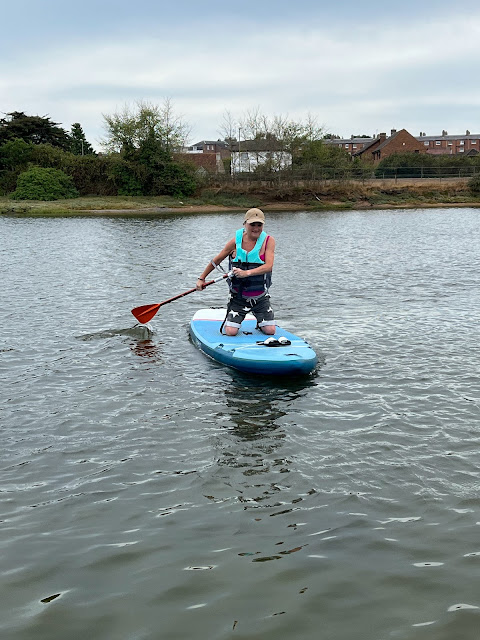 You might have noticed that inflatable watercraft are EVERYWHERE from budget supermarket's middle aisles to those discount emails like Wowcher and Groupon. For the price of a takeaway I found myself the proud owner of a double kayak with paddles and pump!

We bought and borrowed life jackets and headed down to the canal where we spent a happy afternoon larking about and thankfully, not sinking. 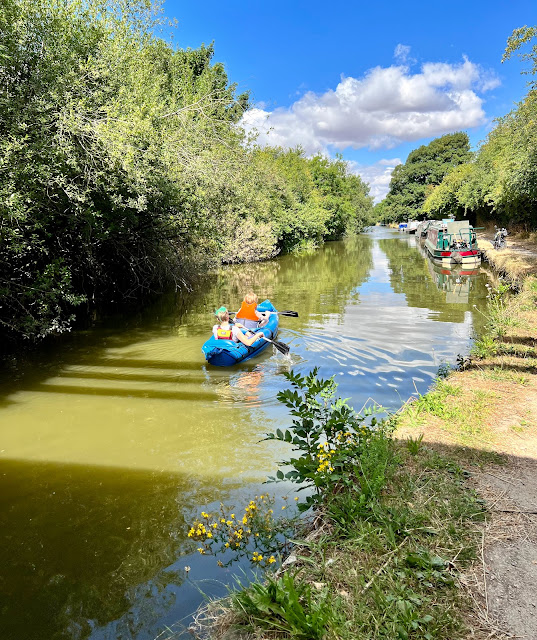 A couple of my children bought a SUP and during that heatwave we very much enjoyed the cool water and shade from trees along the canal. 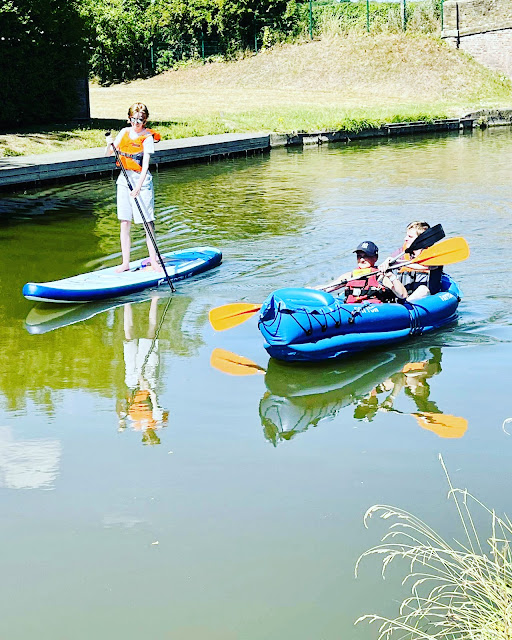 Then my friend invited us round for cocktails in her garden and as I was raving about our floaty toy I was reminiscing about the fibre glass crafts my family used to use my pal's husband did a quick Ebay search and found a cute second hand fibreglass kayak with paddles  - again for the price of a takeaway!

We patched up any dubious areas (easy to do with a fibreglass kayak) and this weekend headed to Alverstoke Creek in Gosport, a shallow sheltered spot to check it was watertight. I really didn't fancy sinking in the canal!

Despite quite a strong wind I had lots of fun exploring the creek. My husband managed to capsize it but apart from a slightly scraped knee and dented pride all was well. 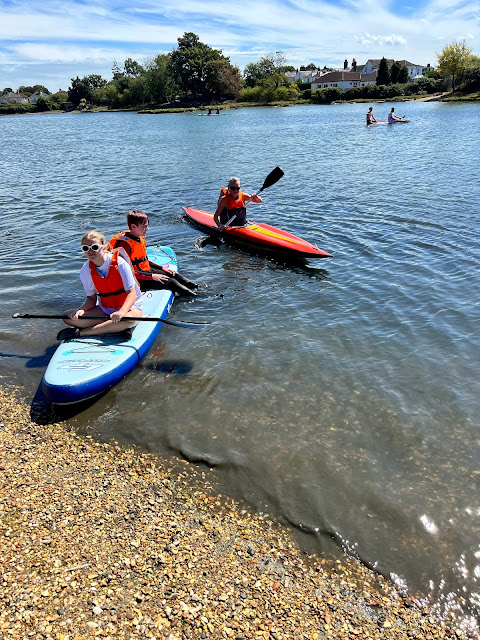 I've lost half a stone - probably because I diverted takeaway treat money to kayaks instead of Katsu curry AND have spent lots of time on the water exercising. Also even I can't eat biscuits in a kayak. I'm hoping my emerging bingo wings might also retreat. Kayaking on calm water doesn't seem to flare my Fibro too badly, especially in the double where I can mostly sit and enjoy the water while someone else paddles. My single seater moves with very little effort on the waters I paddle on and again, I can rest and just go with the current every now and then. 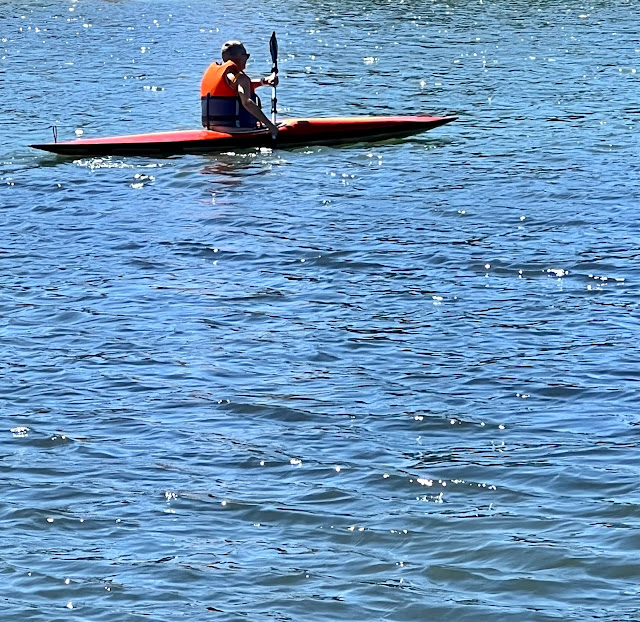 Another bonus has been that my previously very much indoor screen-loving child has discovered he enjoys paddling too so there's lots of watery confidence building and outdoorsy-ness which I wouldn't have previously thought possible! 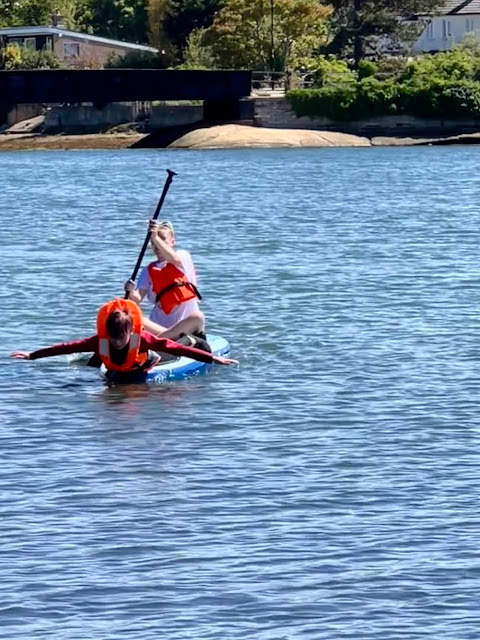 If you are thinking of trying kayaking or paddle boarding and are wondering about buying inflatables - Do it! Join  British Canoeing and buy a licence from them which will cover you for canals and many rivers. Only one person in a double kayak needs a licence. The sea and tidal rivers don't require a licence.

UPDATE: My mum tells me we had canoes -  one or two fibre glass singles which is probably the ones I recall  and a double canvas one which had to be re-proofed every year.