My Memories of The Queen

I recall being very excited about the Queens Silver Jubilee in 1977. I was 7/8 and there were lots of exciting things organised through my primary school and church plus street parties everywhere. There was a lot of pomp and ceremony and parades. Although the pic below was taken in 1965 it gives you an idea of the sort of thing we were seeing on our tiny TV's. 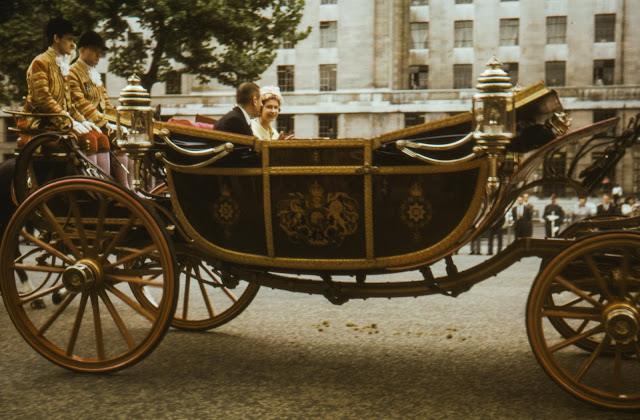 I remember a very busy and happy day being presented with commemorative coins, winning a prize for a poster I had created about the Queen using ALL the glue and then to top it off wining the three legged race at the street party in the cul-de-sac my Granny lived in. I was wearing a red gingham dress I was very pleased with and the sun was shining all day long.

Fast forward a few years and I was working at newspaper covering Malvern and Worcester and surrounding areas. I was asked to cover some of the many Royal events during the years I was there and I have say despite my generally cynical nature there was something exciting about seeing various members of "The Firm" up close.

There is one photo I wish I'd taken with me when I left that newspaper in the early '90's. The Queen had visited Worcester in November 1989 to unveil and inspect variety of stuff. As always members of the Press had to gather quite early for a stern briefing about never speaking directly to the Queen, staying a certain distance back when following her on the tours and to never walk in front of her.

The Royal Press pack sounds like a fun and exciting gang to be in but let me tell you it was mostly very dull with a lot of hanging about. The Queen might be enjoying a banquet but we had to lurk in a back room with no food or drink provided and no way of popping out for a sneaking Big Mac.

Her Maj spent a long time walking round the Cathedral asking lots of people lots of questions and generally doing what she did best. We'd been told to wait outside the main doors, to the side to capture her exit and the reaction of the assembled crowds. Back then I was an occasional smoker and when the photographer offered me a ciggie I accepted- anything to break up the boredom for a minute.

It was windy so I moved a metre or so from our allocated spot to shelter next to the grand arched columns surrounding the door. All of a sudden the Queen emerged from the same door and my photographer friend hurtled to the centre of the road to capture her walking out from the cathedral.

It took me a few seconds to twig what was happening but my snapper mate captured an amazing image of the dainty Queen framed by the majestic arched doorway and me, leaning nonchalantly against the pillar enjoying a crafty drag.

I met her again a few years later working for another newspaper. I'd been told to stand in front of a cordon with crowds behind me. In front of me was a short, narrow pathway into a house which the Queen was visiting - I think it was a new social house development she was unveiling. Anyway, as she emerged from the house a woman right behind me yelled: "WE LOVE YOU MA'AM!"

The Queen looked directly at me and for some reason, wanting to clear up any potential misunderstanding I said: "That wasn't me by the way."😱😱😱

On the day she died I was in London with my 21-year-old. After learning that the family was heading up to Balmoral it wasn't really a shock to hear she had died but it still felt quite momentous to me. Not momentous enough to want to go and stand at Buckingham Palace gates you understand but definitely end of an era vibes.I also won't be queuing to see a flag covered coffin but you do you.

My husband headed up the church tower in our village to lower the flag to half mast. He said he felt like he should say something so he went a bit theatrical and said "God Rest the Queen, Long Live the King." and then said he felt a bit silly. 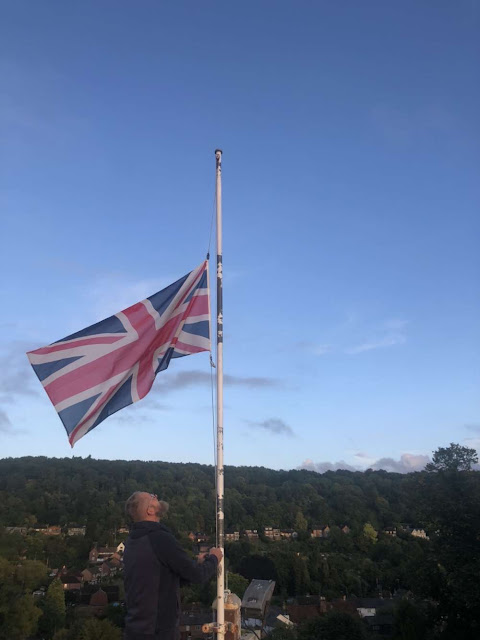 For me though I will just recall the lovely memory of the little girl I was wearing a new dress, thrilled to be getting jelly and ice cream served by my Granny's neighbours in the sunshine for a Queen who would go on to serve many more decades than I could even comprehend.